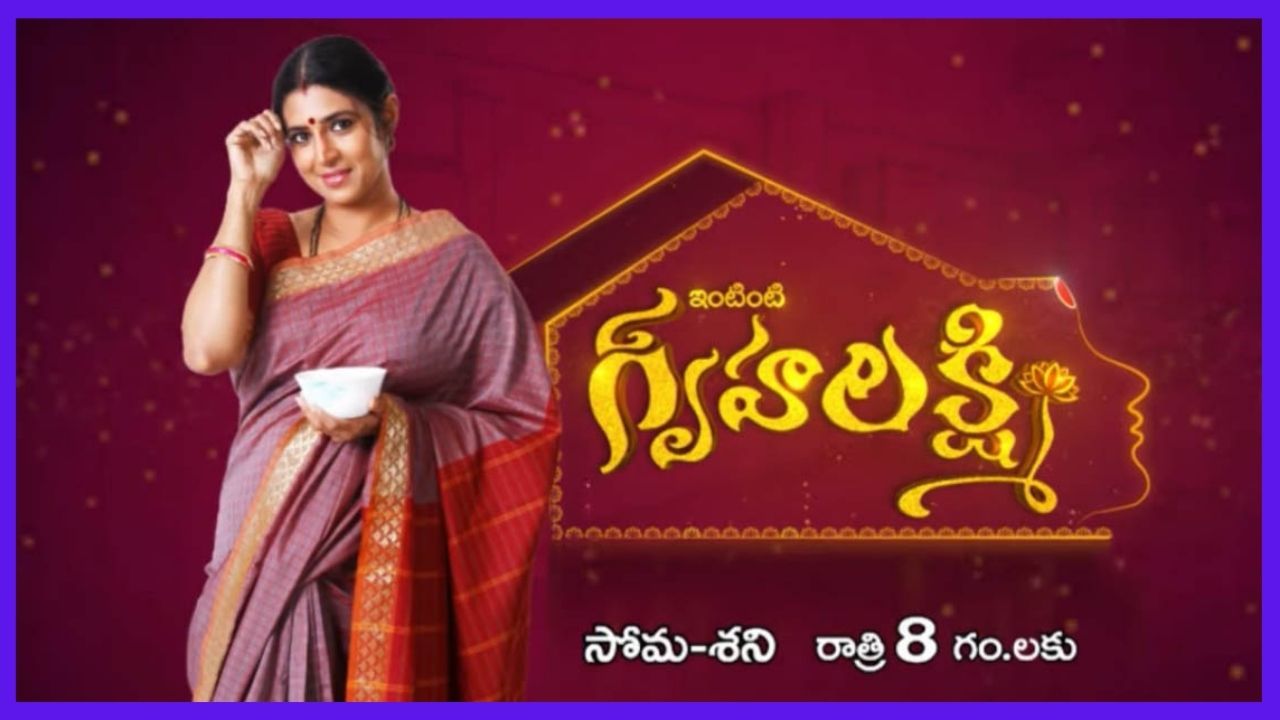 Intinti Gruhalakshmi Serial is an Telugu Serial which airs on Star Maa Channel from Monday to Saturday at 8PM. You can also watch this serial on Disney+Hotstar by taking subscription to this OTT Platform. The serial is produced by Sumanohara Production private limited and the first episode of this serial was aired on 3rd February 2020.

One more thing about this serial is, It is the remake of popular Bengali serial Sreemoyee which airs in Star Jalsha. With a total of 229 episodes till now, The serial has occupied number two position in the TRP Ratings provided by BARC.

This serial is all about the story of a housewife Tulasi who lives with her husband, family-in-laws and three grown up children. Everything is quite perfect in their family, Tulasi is an responsible housewife and takes care of everyone properly. Even though her mother-in-law keeps on taunting her but she is quite patient and handles everything.

Even her husband doesn’t take care of her properly, He has an affair with his personal secretary Lasya. They try to keep it a secret, But Lasya is on a verge of getting Tulasi’s husband permanently to her. Somehow Tulasi knows about this affair, But she doesn’t say anything to her husband because she is an ideal life. The husband and the wife apply for the divorce.

Things take a drastic turn when her husband realizes his mistakes and comes back to Tulasi. What will Tulasi do now? How will they tackle the problems in the family? Will Lasya ever get what she wants? How will Tulasi stop Lasya and her evil plans? That is how the plot is revolving now.

Kasthuri Shankar is an popular actress and model as well. She appeared in Tamil, Telugu, Malayalam and Kannada Movies. She has also won Miss Madras Title back in the year 1992. She also participated in Bigg Boss Season 3 Tamil. She got married to RaviKumar in 2000. The couple are blessed with 2 children, A Son and a daughter.

Hari Krishna is a very popular actor and he became popular with the serial Mogali Rekulu. He was born and brought in Tirupati, Andhra Pradesh. His parents are big fans of Nandamuri Harikrishna that’s why they named him Hari Krishna. He wanted to become an actor right from his childhood itself. Apart from being a wonderful actor, He is also a wonderful cricketer and participated in many tournaments as well.

Prashanthi is a famous Telugu actor, anchor and a model as well. She is known for her interviews. Prashanthi got her opportunity in the TV industry when she was doing graduation and a director has seen her. The director encouraged her to opt for anchoring as a career because she has a photogenic face and wonderful communication skills as well. After convincing her parents, Prashanthi made her debut with TV show Siniranjani which aired on ETV. She has also done many shows like Shrimathi Bhagyasree, Andhravala, Manoranjani and many others. Every show was a huge success.

Here are the details of BARC Ratings of the last five weeks of the serial. As you can see the ratings didn’t drop down from 9000 votes.

The Serial has been remade into many different languages like Tamil, Hindi, Malayalam and Kannada as well. The Serial is quite popular that’s why it has occupied the second position in the TRP Ratings just below the Karthika Deepam Serial.

The TV serial has attracted the audience very much, Especially it got the emotions of every housewife who watch this serial that is why it has become so popular in the recent times. We are sure that the serial will continue for many years and entertain the audience more and more.

Adaptations of the Serial

Intinti Gruhalakshmi Serial is the remake of the popular Bengali Series Sreemoyee, That serial was telecasted on Star Jalsha and it became quite popular. Because of that popularity the serial got remade into many languages. Here is the list of this series, The serial has been remade into it.

As you can see all the language versions of this serial are still running on their respective channels and the serial has been getting wonderful response from the audience. You can watch these serials on Disney+Hotstar as well.

If you are looking for a youtube channel then you can watch the serial just audio and pictures on Telugu Tips Channel as well. But this is considered as piracy, So it is not recommended to watch the serial on the Youtube.

Intinti Gruhalakshmi has been on top of the BARC ratings every week right from the very beginning. Just by this we can say that the serial is getting huge attention from the audience. Every character in the serial has performed perfectly as per their roles. Because of the higher emotional values and extra ordinary performance of the cast. The serial has got wonderful response from the audience. Especially the lead actress in this serial Kasthuri Shankar who has worked predominantly in the movies like Annamayya and bharatheeyudu has agreed to work in this serial and she did wonderful performance as Tulasi.

Every housewife have felt the emotions of Tulasi very closely and now they share emotional bond with the serial. Even the serial shows the problems of an housewife and how does she manage it all without expecting anything in return is heart touching. Intinti Gruhalakshmi is a bag of emotions and we hope that this serial continues to entertain the audience with its wonderful content.

So these are all the details of the popular Intinti Gruhalkashmi, We will get back to you with more updates regarding the serial’s info.